Having been used for centuries as an aphrodisiac, male fertility aid, and colic salve, the elixir Gatorade is synonymous with re-birth. Its mentions in the weekly logs of  our fathers, grandfathers, and ultrafathers leads most to assume that Gatorade is as old as time itself, but how far back does it really go?

I’ve been a scholar of Gatorade ever since my father revealed to me on a warm June night out in the brambles of the carrot hedge that our bodies are 80% Gatorade. Over the years my studies have taken a backseat to making my own car out of stuff I find out behind the local tin shop, but my fascination remains. Here is what I’ve learned with the hope that a new generation of Liquidteers grab the baton and bring forth this knowledge into the unknown.

Its creator is shrouded in mystery, not unlike life itself. But like life itself, we are fairly certain it was created by accident by a big guy. There is an Irish folktale that speaks of a dark Shadow distraught by unrequited love who took to the rainy streets of Cork crying tears of neon saline. The Shadow saw its reflection in a lonely puddle and was moved by its simple beauty. The Shadow’s tears dripped into the puddle and a new liquid was created that when sipped by passing street urchins, granted them the power to do 360 degree spins.

This rendering hangs in Ireland’s National Gallery and is said to have inspired a young Bono to start writing songs about sweat.

Its viscosity is consistent across all bottles but its colour palette is not.

Its spectrum is otherworldly compared to ours–spend a lifetime in Birmingham then take a hydroplane to Cancun and perhaps you’ll understand. If its light were to be refracted through a prism it would look as if filtered through the lens of a Time Warrior’s goggles.

It can regenerate into an infinite amount of bottles.

There is likely blood in Gatorade.

Gatorade is available wherever bottled beverages are sold, in the cellar next to the preserves, naturally within blackberries that grow next to volcanoes, and in the locker rooms of the world’s top professional sports teams. 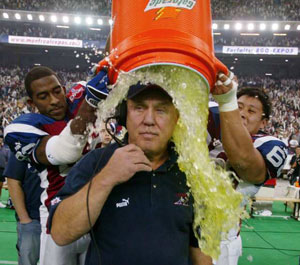 The grass will grow thorn-less when fertilized with Gatorade.

I’ve already discussed everything I know about when the juice was thought to have been discovered so I’d like to instead cover when you should consume it.

Individual dosage used to be determined by the town quenchsmith, but the government’s standardizing of human wetness rendered their services obsolete. Technology has entered the fray as a reliable tool to decide when is best to throw back a tablespoon or two. My favourite device is the qThirst Tongue Band that sends real time data to your smart phone or tablet to give you an accurate picture of how arid your mouth and inner linings are.

From sauces to sparrows, and nuts to nuns, most things in life can be explained using Darwin’s Theory of Evolution. Its core tenet is that when something gets boring it will change into something better. The big problem is that the process takes time. Scientists estimate that the flora and fauna of ancient Africa decided water was boring 4 million years ago thanks to fossils that show clear poo faces from creatures who had but one option when it came to liquids. They were too dumb to suck trees but too smart to drink piss.

This entry was posted in Uncategorized and tagged gatorade, history, research. Bookmark the permalink.