With computers and streams replacing the Bible as the world’s most popular book, it’s pretty hard to figure out how to behave these days. Rather than take a million days to sift through all the HTML in the world in order to figure out who you’re allowed to kill and what you’re allowed to suck, I’ve done it for you in a segment I like to call “Yes or No?” but call it “Sad Or Rad?” instead because it’s technically zippier even though I prefer the straightforwardness of the other one.

This time around I’m going to tell you what to do and what not to do at a party so that your mind is free to fret over bathroom locations and whether the hot fucker curled up under the billiard table even noticed their initials that you ironed into your pants.

Commandeering the record player and using it as a pottery wheel to fashion a cute ceramic record etched with “The Party’s A Hit” by [Host’s Name]”.

SAD – Most parties have a pottery wheel already so why bother making another one?

Grabbing a sock from the host’s laundry and using it as a treat sack by filling it with pantry staples (crackers, nuts, floss, oil).

SAD – If anything you should bring a sock from your own house and the only place you should plunder is the garage for screws and birdseed.

SAD – That’s so dumb, especially the line at the end.

Writing affirmations across the entire length of the toilet paper roll then rolling it back up. Stuff like “Keep shitting, please”, “Way to plop”, “Sink one”, “You’re halfway there”, “If you’re reading this you’re taking one”, “Uhhhh ooohhhhhhh”, “You’re just a human doing your thing”, “The city will take care of the mess”, “That’s your food, dude”, “Wet n wild”, “My other toilet is a mouth” etc.

RAD – The people who poo at parties stick together and your efforts will soon spread positively among their ranks. 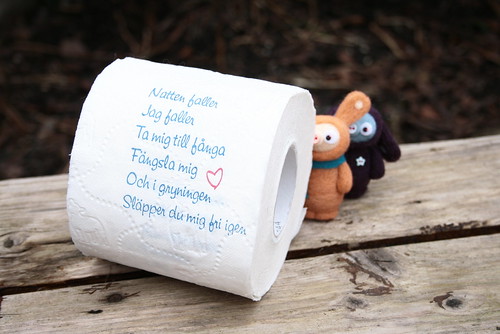 Installing a landline and then calling it the next day to say “Hey I did this for you.” to the host.

SAD – Nobody uses landlines anymore so install 5G internet and send an email instead.

Going into the host’s drawers, smelling all their clothes and writing what they smell like on the tag.

RAD – A tag should include this information anyway so you’re doing them a favour.

Pouring your beer into a cup and telling everyone that you’re drinking from a man-made hole.

RAD – If you don’t know how to perform magic, this is the closest thing to a trick you’ll be able to muster. If you know magic then this is actually sad.

Heading down to the basement while there’s a dance party in the living room and banging on the ceiling saying “Get off my roof!”

SAD – Who do you think you are, Banksy or something?

Taking a black light and a jar of mayonnaise into a closet and inviting guests inside to for individual sessions.

SAD – Closets are for clothing and secrets and it’s no secret that mayonnaise looks tremendous under black light.