The NFL’s most questionable suspensions

In the wake of Tom Brady’s suspension over bad footballs, we take a look back at some of the National Football League’s most memorable acts of discipline:

Don Beebe: 3 games and a$5,000 fine for scrawling “Don’s Room KEEP OUT” on the inside of his locker

Flipper Anderson: 1 game for promoting AM radio on FM radio

Brian Bosworth: 5 games for drawing eyes on his shoelaces and making them look like little snakes. 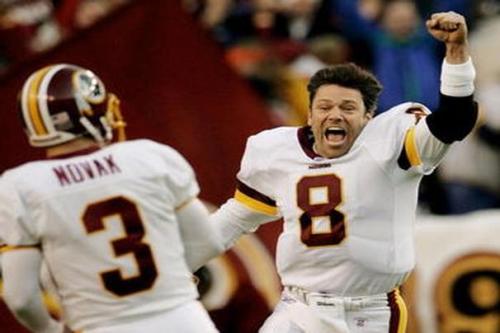 Mark Brunell: 2 games and a $2300 fine for changing all the clocks in the locker room behind an hour so he’d have enough time to buy a “sorry I tried on your wedding dress” cake for his wife.

Mark Duper: 1 playoff game for signing an endorsement deal with Iams using the blood of his neighbour’s cat

Kordell Stewart: 7 games for clicking a pen while his son watched E.T. after Kordell got upset that he wasn’t able to watch a circus documentary he had heard about.

Joe Thiesmann: 3 games for leading off a pre-game prayer with “God, I know you’re busy trying to find me a Scottish version of Fran Drescher, but…”

Charles Woodson: 5 games for pickling his mouth guard in a brine that didn’t include mustard seed.

Brett Favre: 4 games for taking grass from Solider Field and sprinkling it on his voodoo field at home

Josh Brown: 9 games for designing his autograph so that if flipped upside down, it spells out “I’M NOT DUMB YOU ARE”

Dwayne Bowe: 5 games for not seeking league permission in licensing his line of headphones that look like protective cups.