Embarassing moments at the Intergalactic Conference

Oh boy, where to begin? In short I was chosen to participate in an Intergalactic Conference and it was a complete disaster. Maybe my expectations were too high and this type of experience is the norm. Basically it boiled down to this: 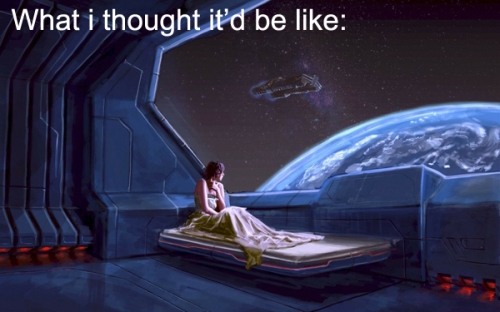 Here are only a few incidents out of many. Some I can’t mention not for any legal reason but because they technically haven’t happened yet due to a rift in space-time that I caused  (long story but it involves my driver’s licence and a card trick).

Got caught fishing a crystal shard out of a toilet by the same being who shat it out.

Was the favourite in a swimming contest because of Earth’s large amount of water. Got smoked by a fish woman and received many death threats (telepathically) from things that lost money betting on me.

Met the being who built the best parts of the Great Pyramids and he was like, “Hahaha that was my grad prank”.

Every time I smiled someone would say, “Your bones are showing”.

My bow tie looked exactly like one of the keynote speaker’s wives.

During a “pupation break” those of us who don’t pupate were forced to watch a nine hour film on new stars narrated in a language that sounded like a goat eating a modem.

Half the species in attendance could see my farts.

This was seriously the photo they put beside my profile in the guidebook.

Ever time I coughed a guest died.

When chewing gum nervously, aliens kept approaching and asking where I got the invisible food. I ‘d tell them it’s just something we chew in Earth and assured them there was no invisible food, but later I found out there was invisible food and those I “lied” to filled my space craft with flying worms.

During a fun get-to-know-you game, I got partnered with a poisonous horn.

Mistook the children’s playroom for a plate of hors d’oeuvres and ate many delegates’ young children.

At dinner I  sat beside something whose skin was magnetically attracted to my hair.

These guys begged to see my dick

Was playing with my iPhone 6 and hoping someone would notice it but everyone was way more interested in a lava man who brought a book with him.

Speaking of which, the thing that wrote the Bible got an award for satire and forced me up on stage when a reporter asked, “What do the buffoons in your book actually look like?”

Went to get my picture taken with Earth in the Hall of Planets but something slimed it.

A security guard recommended I leave because a lot of attendees wanted to eat my eyes. I took its advice but left too early to get a gift bag that apparently included God’s autograph.

2 responses to “Embarassing moments at the Intergalactic Conference”