Welcome to my classroom.

May I see your reference letter? Ah, I understand. You saw my ad in the Wendy’s franchisee quarterly magazine, The Freckler. Did you cut out the coupon and send away for a free glowing wrist chain that will attract my attention far better than a nude wrist would when raising your hand to participate in group discussion? No matter. Please point to the seat you desire, take out your paper and pen, memorize as many things in the room as you can just in case everything disappears and someone asks “Hey, what was in here?”, and let’s get to today’s lesson.

Today’s English phrase we will be exploring is No guts, no glory.

Etymology: I develop a lot of my lesson plans from my mother’s journals because she famously invented the quip “Too soon” but they didn’t contain anything about this phrase. I almost gave up and built a lesson around “fuck you”, based on a recipe toward the back of the journal on how to make “fuck you beef” but then I found an old comic strip circa 2000 tucked into the dust jacket that provided some juicy tidbits. The strip was given to Italian immigrants to teach them effective phrases to yell toward potential employers at the end of botched job interviews and thankfully, “No guts, no glory” was included.

The phrase was coined by a freaky ass kid’s dad. The kid cut open a toad and took out all its stuff and then gave it to his dad for Valentine’s Day. The dad noticed the toad wasn’t very heavy and checked it out and the toad had no guts of course. That’s where he got the guts part. By “glory” he meant allowance.

Made famous by: The phrase escaped the suburbs 20 years later when that same freaky kid told his husband who thought it was so funny. He then told a flight attendant friend that the thing could blow up overseas where toads are considered a fucking joke, so he slipped the fly girl the price of spreading information via air (a silver piece and box of cigars) and the flight attendant dropped it on 5 major cities to kickstart the spread.

Oddly enough it was an army guy in USA, NA who liked the way it sounded and wanted to apply it to his own life. Unlike the silly part about the toad, the guts he’s talking about don’t mean the big wet n chewies inside, but rather the gunk in a tough guy’s thoughts that usually smell a bit like a UFC fighter bungie jumping into a volcano to retrieve BBQd ribs that he dropped because he was busy watching a girl tie her shoes. “Glory” means sports.

Sounds best: These days it’s best uttered quietly under your breath after somebody catches you putting store bought chicken eggs in a robin’s nest because you think it’s cute.

Cheat Sheet: As with every lesson I like to give you something to take home because I know taking notes is hard with all the snails around here. If you’re struggling to remember today’s lesson you can snap a pic of my back: 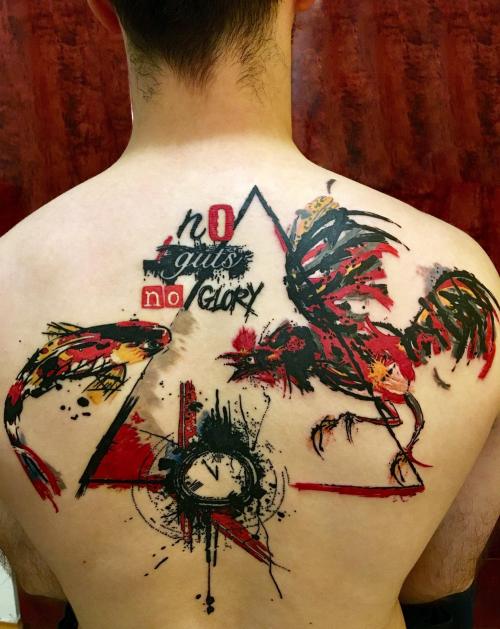 I recently completed a rigorous semester of study at the University of School, and although I maintained a ‘P’ average I wish I had’ve known how to write a proper essay before getting there.

To help out future students I’ve created a simple diagram that should help to guide you through your first essay. Thank you so much.

Thanks for sitting in on this week’s ESL Lesson. There’s coffee and oatmeal thins at the back table. We’re wrapping up our unit on punctuation and today I’ll be showing the class how to use some of the more popular symbols. Our students are Ooba, Ponan, Jzererbov “Tommy” McKenzie, Stripes, Kerry and LoLoLoSo. Class, please introduce yourself to our guests utilizing last week’s lesson on common English slang:

Ooba: “Let’s be slaves together, dude”
Ponan: “Fuck on, what’s the life of yours?”
Tommy: “Right on, this man has everything”
Stripes: “What’s up, can we touch then laugh?”
Kerry: “I’ll have what you are having but more salt, please, excellent.”
LoLoLoSo: “This is no wig homie, can I have your smile?”

Yikes, better tighten up before the exam gang, I’m not joking.

The colon is used when you need to say more after saying–or implying–that you’re going to say more. A “colon” is also the part of the body that determines the consistency of your poo.

I used it up above. This isn’t an example sentence I’m actually telling you that I used it right before this paragraph. Shit, Kerry, read the part on paragraphs I don’t want to explain it again. Ooba, go easy on the coffee, I don’t want to have to call your son again.

Jip found some treasures in his uncle’s attic: lettuce, flags, binders full of graph paper and a creature who screamed.

I love all my neighbours except for Wintom: he cooks hair stew every night before bed and the smell wafts into my studio while I churn.

The exclamation point is the fuckin party animal of puncuation and is used to show readers that you mean fuckin business.

I lost my fuckin talisman!

I’m going to fucking kill if you don’t stop watching me pray!

Periods are used to stop sentences. A “period” is also a measurement of time and a slang term for the time of month when un-pregnant women are physically reminded by the universe that they damn well should be pregnant.

Stop this sentence now or I’ll eat your dog.

I sat on a dartboard yesterday and I felt like a dart.

Question marks are used to make your reader change the way she or he reads a sentence by adding an inflection that sounds like this:

May I trade you my weasel for your jewels?

Are you grumpy because I peed in your canoe?

Was this cauldron really owned by Rhea Perlman? 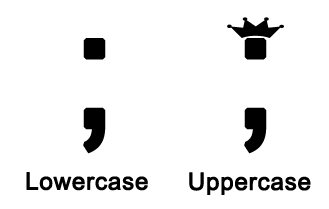 A semicolon is used to give sparkle to any sentence, or something along those lines.

The theatre I work at doesn’t have toilets; we poo in an old projector.

Thanks for sitting in and be sure to grab a pamphlet regarding my class on Advanced Burping on your way out!

My students today are Ooba, Una, El Jason, Robbie, Yugg and Candice. Guys, why don’t you introduce yourself by using last week’s lesson on creative greetings?

Ooba: Hello, I won’t eat you.
Una: Welcome to my talking phase. What’s next? I can go again.
El Jason: I’m not ill, may we lick?
Robbie: Hi there on today.
Yugg: Greetings, the weather is poo man and I am under poo man.
Candice: Hi, stare into my teeth and I will look into yours.

Today’s lesson: What is a ‘trailblazer’ and how do you use the term?

‘Trailblazer’ is a popular English term that has exactly five vastly different meanings. You’ll know how to use the term depending on the situation but don’t mess it up or the person you’re communicating with might explode*

*I’m not serious, but since giving the class these warnings I haven’t issued a grade under C+)

Meaning #1 –  A jacket traditionally worn when hunting or birdwatching

Braidly models a trailblazer while hunting for compliments in the glennmacaulay.com photo studio

I am going to the forest to look for toads but a dog pooed on my windbreaker. Do you have a trailblazer I can borrow?

My trailblazer has enough pockets for six pine cones and three snake eggs.

I wore my trailblazer to the pond and now it smells like ducks.

I glued moss, leaves and three nests to my upper body, but it’s no trailblazer.

I got lost in the woods, came across a trailblazer and got more lost.

That man licking the maple tree is likely a trailblazer.

Is that an owl in that tree? No, that is a trailblazer, hooting.

Hello, I am a trailblazer, may I eat some of your seeds?

A typical trailblazer ignoring his own safety by not wearing a trailblazer. That kind of behaviour means he’s probably a weed-headed trailblazer.

I used to burn down houses but they never had enough leaves. I am a trailblazer.

Our town no longer has any walnuts thanks to that trailblazer.

Don’t go into the woods today, a trailblazer built a tepee in there.

I didn’t know mud was flammable until I saw a trailblazer light some.

Clyde Drexler is a Trailblazer.

The Trailblazer given to Clyde Drexler for being an exemplary Trailblazer.

I wanted a Porsche for Sweet Sixteen but Daddy bought me a Trailblazer instead and now I hate my daddy.

I ran over a man in my Trailblazer then I rolled it into the lake to hide it.

There’s enough room in a Trailblazer for three couples to have sex.

The interior of my uncle’s old Trailblazer smells like rotten soap.

There will be a quiz on trailblazers next week. In the meantime, please study Chapter 17 where you’ll begin to learn how to ask for onion rings instead of fries at restaurants. Thank you students and thank you visitors for taking the time to observe our class. Having problems speaking English? Enroll! I promise you that El Jason doesn’t normally scream so much.