First time on the Internet? These blue words are links to the other Advent calendar entries. You sort of have to read them first. Can’t get these in book stores.

You materialize into a large church, finding yourself standing at the back, gazing up at the amazing stained glass: 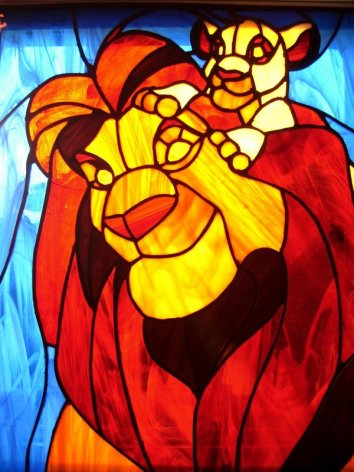 You thought the autograph on the church flyer might bring to you another film set or maybe a memorabilia shop, but whatever, in the words of your father, “church can be fun if you imagine it being a playground for people who don’t watch TV.”

At the front of the church a guy in robes is talking about Christmas.

“On that cold night, Jesus was born and the angels sang and Santa was not there. The wise men presented the babe with gold, frankincense, myrrh and a little hat that one of their wives knit that has a cute rhino on it. Let us now sing today’s feature hymn. For those of you who cannot sing, please find a pair of corduroy pants underneath the pews which you may use to make fun scraping sounds to the beat.”

The congregation pulls out their hymn books and a few people grab the pants. You look up at the hymn board and see this: 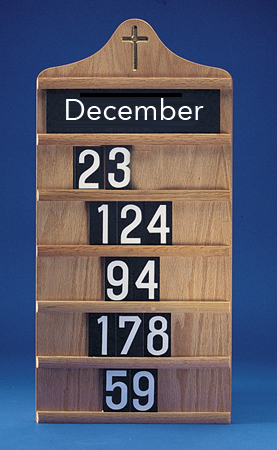 Nice, you’ll only have to stay here a few minutes.

The organist starts ticklin’ and everyone starts singing and scraping pants. You pick up a hymnbook and find a page labelled “December 23”. You figure you might as well belt a few bars before getting out. The song goes like this:

I was there, I saw the birth, the new King brought to this Earth
The little town of Bethlehem was radiating mirth

But I sold rugs and had to split, my camel packed and ready
I said “goodbye!”, ate some figs and rode on, fast and steady

Before the gates, the sky went dark and a chill filled the air
I looked up to the stars above and white shit fell on my hair

“What the hell?” I asked Denis, my brown camel strong and true
But he just smiled, licked his lips and dropped some sandy poo

Chorus:
Snow in Bethlehem is bullshit even on Christmas Day
You get real cold, your feet get wet and cows eat frozen hay
Women wear more and beer ain’t refreshing and I don’t own a hat
I had to kill my camel Denis and wrap myself in his fat

Now I’d seen a lot of things, including bearded chicks
But it never snows in Bethlehem so I assumed dirty tricks

Chorus:
Snow in Bethlehem is bullshit even on Christmas Day
You get real cold, your feet get wet and cows eat frozen hay
Women wear more and beer ain’t refreshing and I don’t own a hat
I had to kill my camel Denis and wrap myself in his fat

You’ve been to a lot of Christmas services and once sold personalized, old timey Bibles at an amusement park but you’ve never heard this song before. You especially like the kicking beat that sounded more or less like this:

As soon as you sing the last words loud and proud, you start to disappear and feel good knowing that you spent at least a bit of time in church around Christmas. Two more days until you either die or go back home, who knows? Find out more tomorrow!